Belinostat is a histone deacetylase inhibitor (HDACi). It has been assessed in several clinical trials as a sole treatment (monotherapy) or in combination with other anti-cancer treatments for hematological cancers and solid tumors. Its anti-cancer activity is associated with the inhibition of cell proliferation, the induction of apoptosis (programmed cell death), the inhibition of angiogenesis and the induction of cellular differentiation.

Beleodaq® is the commercial name of belinostat for injection. 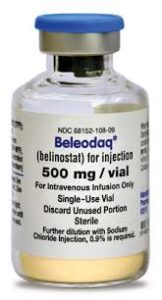 In July 2014, Beleodaq® received conditional approval from the FDA for the treatment of peripheral T-cell lymphoma. This authorization was given within an accelerated registration program which conditionally approves a drug designed for the treatment of a life-threatening disease based on predictive elements of a clinical benefit. The registration was based on the results of the phase 2 BELIEF clinical trial of 129 patients suffering from peripheral T-cell lymphoma, resistant or in relapse after at least one initial systemic treatment, which showed a response level of 25% with a median duration of response of 8.3 months and a good tolerance profile.

Beleodaq® benefits from industrial protection until at least 2026. Its protection is strengthened by an orphan drug designation (ODD) in Europe and the United States, which provides commercial exclusivity. Belinostat could also be developed as an oral formulation. This would enable a significant extension of the intellectual property and facilitate the use of belinostat in combination with other anti-cancer agents.

Beleodaq® has been marketed in the United States by Spectrum Pharmaceuticals (SPPI)  since 2014 in the framework of the conditional FDA approval.

In March 2019, Acrotech Biopharma LLC, a fully-owned subsidiary of Aurobindo Pharma, acquired from Spectrum Pharmaceuticals (SPPI) the license to belinostat for certain territories, including the United States, Canada, Mexico, and India. In April 2020, Onxeo granted Acrotech a royalty-free license to belinostat in all other territories, as well as transfer certain IP and know-how related to belinostat in all its forms. As part of this transaction, Onxeo’s  licensing agreement with Pint Pharma for South America, as well as the contracts with Clinigen plc and iQone for named patient programs in European countries and related agreements, have also been assigned to Acrotech.

This transaction completed Onxeo's transition to a company solely focused on development activities in the field of DNA damage response in oncology (DDR).