A first-in-class product candidate in the leading field of DNA Damage Response (DDR), AsiDNA™ disrupts and exhausts the ability of tumor cells to repair their DNA by acting upstream of multiple repair pathways. AsiDNA™ and its technology originate from three major French academic centers: Curie Institute, CNRS, and the Museum of Natural History. It aims to offer new treatment options for patients suffering from various types of cancer.

A DIFFERENTIATED MECHANISM OF ACTION IN DNA DAMAGE RESPONSE 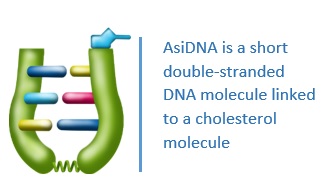 AsiDNA™ is a short double-stranded DNA fragment (oligonucleotide) that acts as a decoy, mimicking double-strand breaks in the DNA of the tumor cell. AsiDNA™ molecules trigger false DNA break signals to activate and attract DNA repair proteins, which prevents their recruitment to the site of actual DNA damage. As a result, damages to tumor cells’ DNA remain unrepaired. As cancer cells have lost the ability to regulate cell division, they will continue dividing with damaged DNA, ultimately leading to cancer cell death (mitotic catastrophe). Healthy cells, on the other hand, will halt cell division until the compound is no longer present and damaged DNA can be repaired.

AsiDNA™ mechanism is significantly differentiated in the field of DNA Damage Response as it does not inhibit specific enzymes (such as PARP inhibitors) but targets the entire DNA repair process, acting upstream of multiple DDR pathways as an agonist through a decoy mechanism. 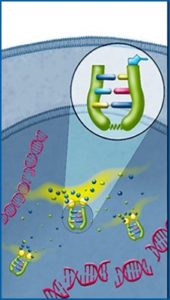 The actual tumor DNA breaks are not repaired and accumulate: the cancer cells die when they replicate with damaged DNA.

AsiDNA™ is a multi-target decoy agonist, the only agonist in the field of DDR

Unlike targeted therapies, AsiDNA™ acts on many proteins, particularly PARP and DNA-PK which are involved very early in the damage response, from the detection and signaling stages.

AsiDNA™ acts on all repair pathways:  the tumor cell cannot use another protein or repair pathway to resist its action, which is the case with targeted therapies.

The more AsiDNA™ is used as a treatment, the more effective it becomes

AsiDNA™ does not oppose, but on the contrary encourages, hyper-activates and hijacks a natural biological process so essential for its survival that the tumor cell cannot stop it. Thus, AsiDNA™ is increasingly effective as the tumor cell exhausts its ability to respond to DNA damage.

Thanks to these distinctive properties and a favorable safety profile, AsiDNA™ is ideally suited for development in combination with other anti-cancer therapies.

An extensive and robust preclinical package has been built highlighting the differentiated properties of AsiDNA™, notably the absence of resistance after repeated treatment, the prevention and reversion of resistance to PARP inhibitors and a strong synergy with other anti-cancer agents such as PARP inhibitors or platinum-based chemotherapies.

Learn more on the effect of AsiDNA™ on tumor persister cells,
contributing to tumor resistance to treatment and cancer relapse

AsiDNA ™ has already demonstrated a good safety profile in two phase 1 studies, via intratumoral and via intravenous administration, and is currently being evaluated in combination with chemotherapy (carboplatin and paclitaxel) in solid tumors in the DRIIV- 1b study.

AsiDNA™ is protected internationally by several patent families covering the chemical composition of the product, its method of use or of administration as well as some combinations with other anti-cancer products.  These patent families give AsiDNA™ a very wide field of protection.

The main patent protects AsiDNA™ until mid-2031 and may be extended until 2036 via the different supplemental protection systems prevailing in the United States and in Europe. The latest patents on methods of use or combinations - such as with PARP inhibitors - will be valid until 2036, before extension period.